The Blue Room hosts the launch of Impossible Causes by Julie Mayhew, ahead of the opening night of The Crucible, performed by The Asylum Players.

Award winning author Julie Mayhew will lead a conversation with members of the cast and crew of The Crucible ahead of the play’s opening night. Julie’s new book, Impossible Causes, published by Bloomsbury, draws elements of its story from Miller’s classic play, looking at the terrible effect isolation, rumour and suspicion can have when combined with deep religious adherence, in a small community. 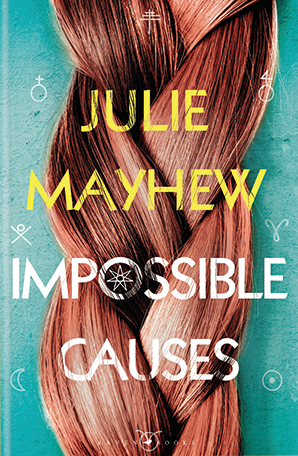 Both Julie and the cast of The Crucible will be discussing the novel, Miller’s play and the influences that drew them together. We cordially invite an audience to come and put their questions and thoughts to both parties.

The event is free to attend and tickets will be allocated on a first come, first served basis.

‘I’m fascinated by small, closed communities and the girls that grow up in them. Impossible Causes will, I hope, speak to some very timely, real-world concerns about how young women are treated by society’
~ Julie Mayhew

Three strangers arrive on the tiny island of Lark – a remote and deeply religious island with a history of paganism. One has travelled there to take on a teaching post and become the only male teacher on the island. The other two, a mother and her teenage daughter, are running from something terrible back on the mainland.

As the fog descends and Lark becomes closed off from the outside world, a man’s body is found. Rumours spread, tensions rise and the three eldest teenage girls on the island are accused of witchcraft – and of murder.

Have Your Say on Devolution for Lincolnshire

Businesses in Greater Lincolnshire are being asked for their views on devolution – the process which would transfer powers ...

It applies to plastic packaging manufactured in, or imported into UK, that does not contain at least 30% recycled plastic.

Join our ever-growing membership base

We really appreciate you taking the time to report this bug, we will look into it ASAP.